Vipal Monga covers the world of corporate treasury and finance as a reporter and editor with The Wall Street Journal. In this episode of AFP Conversations he gives a preview of the coming battle over corporate tax reform, what he's hearing from treasurers and CFOs that he regularly speaks with, how his background as a documentary film maker informs his business reporting, and more. 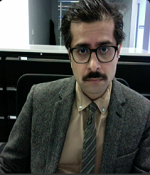 Vipal Monga writes about corporate finance for CFO Journal. He previously covered M&A, private-equity, and capital markets for The Deal Magazine. He also created and developed The Deal's web video presence. Vipal has also worked for Bridge News, both in Ottawa, Canada and New York City, and freelanced for newspapers and magazines, including the Globe and Mail, the Ottawa Citizen, the India Magazine and Blue Magazine. Vipal also makes documentary films. He lives in Brooklyn, NY, but hails from Canada. Follow him at @vipalmonga and at Google+. He can be reached at vipal.monga@wsj.com